Sitting in Boston’s Logan Airport on my way back to Raleigh.  The new school year beckons with the start of class next week!  Since the Kenan Fellows Program kept me busy most of the summer, you’d think I’d use my final days of summer vacation to recharge mentally and prepare for students.  You’d be right, except I didn’t recharge by the pool.  I went on an 11 day road trip with the East Coast Clippers Baseball Club!

The team consists of 12 young men with two aspirations I understand: a quality college baseball experience and admission to a high academic institution of higher learning.  As a former student-athlete at Brown University, a friend involved with the Clippers asked me to help coach the team and it was too enticing an offer to refuse. 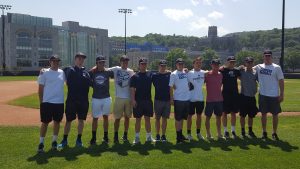 The team, pictured here on the West Point campus of the US Military Academy, has players from TX, FL, GA, SC, NC, VA and NY.

The trip had three goals:

When asked, 9 of the 12 players had never traveled north of Washington D.C.

I could not be more impressed with the commitment of the players to find a school to truly fit their needs and interests.  From the start, the bus zig-zagged the East Coast in search of college campuses.  Starting at Duke, Wake Forest, Elon and Davidson and then on to Washington and Lee, VMI and John Hopkins.  We then continued north to Georgetown, Swathmore, Princeton and UPenn, each school provided interesting insight for students to explore what they really want out of a college experience. “One day baseball ends for everyone,” one coach told our team. “Find a school that sets you up for an enjoyable life after your last game between the white lines.”

The team then played a 4 day, 64 team tournament in New Jersey, in which it finished 7th.  The coach of the U.S. Military Academy at West Point was so impressed he invited the team up for a visit.  A quick shift in the itinerary and we were exposed to the inner workings of one of the most unique collegiate experiences in the world. During the tour we witnessed the 6 week “boot camp” all incoming freshman must endure before beginning classes with the rest of the cadets.  The team then moved on to the Big Apple to tour NYU, Columbia and Stevens College. 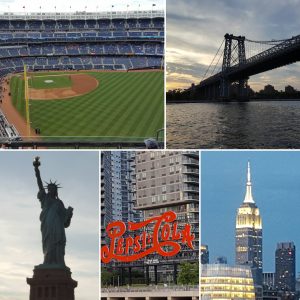 The trip was a combination of college tours, tournaments and site seeing. In New York, we caught a Yankee game, took a water taxi to see the Brooklyn Bridge, Statue of Liberty and Battery Park. We even went to the top of the Empire State Building

We sampled New York City’s local cuisine (Carlo’s Bake Shop) and took in a game at Yankee Stadium.  We rode the subway to Grand Central Station and walked by the Federal Reserve on Wall Street.

Tomorrow the team starts a tournament in Boston and continues to explore what life could be like as a student-athlete in New England.  As I fly home tonight, I already miss hanging with the guys.  As usual, I learned so much from being around such quality people.

As the former president of my alma mater Ruth Simmons put it, “Learning is the antithesis of comfort.” It took an 11 day bus ride filled with enthusiastic young people to remind me how much fun learning should be.  I can’t wait to inspire the same hunger for knowledge embodied by these 12 young men in my classroom next week.