It was a late start, but I was finally able to get out on a farm on Thursday, July 22.

I started the day at 6:30 am. With the sun barely over the trees, we started checking each tobacco barn and removing empty curing boxes in preparation for the afternoon. The heavy crates were coming out of the barns to be filled and packed with the season’s first harvest of tobacco. I learned that farmers will typically load later in the day, as it helps reduce the water content within the tobacco due to early morning moisture. Once that task was complete, I went with the farmer to handle monthly finances and to check on the progress of the migrant labor. We went field to field searching for a flowering nuisance that often towers over the sweet potatoes. The amaranthus, also known as pigweed, has developed a resistance to herbicides due to years of over exposure. These days most farmers have resulted to pulling the weed by hand as the only remedy. After taking a brief lunch, we went back to the tobacco barns to begin loading tobacco into the boxes. It took an assembly of migrant workers, several conveyor belts, and a hydraulic system to load around 840kg (1800 lbs) worth of tobacco in just one box. I helped hook each box onto the fork lift so they could be packed into the tobacco barns for an approximate 9-day curing process. During the hustle and bustle of the loading, the farmer received a phone call that one of the tobacco harvesters had broke down in the middle of the field. Because the harvester was loading new tobacco to be packed that day, it was critical that the machine was in operation to keep up with the crew. We rushed to the field and after carrying several lbs of tools and equipment, we were able to repair the broken torque hub in the rear wheel of the harvester. Due to the delay, we were not able to finish loading the last barn until 8:15 pm that night. As I reflected upon my day on the ride home, covered in dirt and oil, I realized that a farmer is much more than just a farmer. A farmer also has to be an accountant, a manager, a mechanic, a salesman, and so much more. It was a long and full day, but I enjoyed every minute of it! 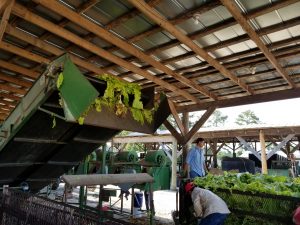 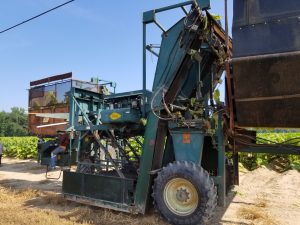 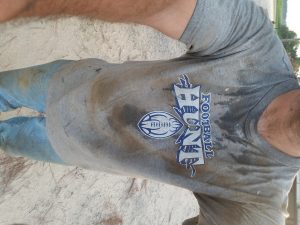 30 thoughts on “First day on the Farm”