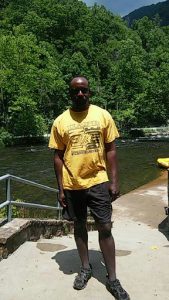 Today’s reflection of the Nantahala river is one of great anticipation before the Nantahala river experience.  I had done this experience several years ago, but, the night before felt a little uneasy about what was coming up the next day.  I actually got up several times during the night – sometimes wondering what the experience would be like this time.  I eventually went to sleep with more excitement and anticipation.  The day of the trip, I prepared what I thought was a great bag of goodies and a nice change of clothes.  The ride to the river was about an hour away and the scenerary was fantastic.  I saw mountains and trees and winding roads that seemed to make the driver extra cautious.

Once we reached the river, we got a great safety briefing by a very knowledgeable guide.  After the guide gave us this briefing, I and the others went to the bus for another ride to the gorge area.  Our team were gathered in teams and were given a great explanation of how the river actually flowed and how what the temperature of the water would be (which was 45 degrees) that did in itself did not excite me, but I was willing to drill in my  mind that I was going to not get wet and I was going to stay in the boat.  As our team went down the gorge, there were points that we were given a geology lesson and a botany lesson.  This was very useful because I teach horticulture and I saw different plants that I had not seen before.  As our team navigated the waters, we were instructed to row together and not to knock anyone’s teeth out with our ores.  This proved to be very helpful advice because we all walked away with our teeth in tack.  The rapids were fast in some areas and slow in others.

The overall group started to pull to the side.  The guides stated putting together the rafts in a line.  I started to wonder what this was all about, then other teams started to run over the top of these rafts and I thought to myself, I don’t think that this would be fun, but after much encouragement and motivation, I was leered to do what other team members were doing.  This proved to be a highlight of my experience because I actually jumped into 45 degree water and not only did it once, but twice.  Thank God, I did not get frost bite.

The rest of the trip was a culminated with getting to the final event and this rapid was the best of all and out team all stayed in and we did not lose a sole.  This experience was about teams working together for the good of a common cause.