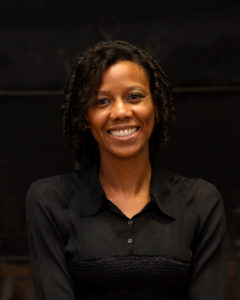 Arthina Dumas is a teacher at NC Virtual Public School and a 2014-15 Kenan Fellow. Ms. Dumas began her career in education nearly 17 years ago as a teacher’s assistant at a Charter School in Romulus, Michigan. She then worked for three years as a reading teacher, and as a teacher assistant at a local high school in Detroit.

In August 2006 she moved to Cary, North Carolina and began teaching sixth-grade math at East Millbrook Magnet High School. Her major was not in education, so she was hired as a lateral entry teacher. She has been teaching in North Carolina for 12 and has taught in several middle and high schools. She currently teaches Math 1 (Algebra) at Middle Creek High School.

She was awarded a Kenan Fellowship in 2014 and completed her internship at the NC Museum of Natural Sciences in Raleigh. In addition, she served for three years on the Governor’s Teacher Advisory Council. She holds a license in Middle and High School Mathematics and Science and has an endorsement in Psychology and a TESOL (ESL) certification.