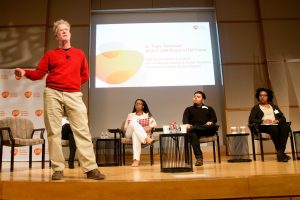 RESEARCH TRIANGLE PARK ‒ GSK Kenan STEM Fellow Thom Tomlinson, Jr. stood before a group of GSK’s employees Thursday, March 23, 2017 and thanked them for providing him with the opportunity to grow as an educator. GSK, a global leader in supporting STEM education, is a principal sponsor of the Kenan Fellows Program for Teacher Leadership, which aims to bridge STEM at work with STEM at school and identifying and developing teacher leaders.

“It was absolutely the most amazing adult learning experience I ever had,” said Tomlinson, who spent three weeks in the summer of 2016 interning at N.C. State University’s ASSIST Center. “We learned about nanotechnology and how it can be integrated into wearable devices. That opportunity was a reward that I’ll never forget.”

Because of GSK’s support, Tomlinson was able to take what he learned working with nanotechnology researchers and integrate it into his classes at Vernon Malone College and Career Academy in Raleigh. He is one of six GSK Kenan STEM Fellows from the Wake County Public School System who were selected for the 2016-17 Fellowship.

“It is critical to have great teachers in classrooms across the state to inspire North Carolina students,” said Marti Skold-Jordan, Manager, US Community Partnerships, GSK. “The  teacher development training GSK Kenan STEM Fellows receive helps to benefit a new generation of talented young scientists. GSK is proud to support this great program.”

The Wake County teachers are part of a larger project spanning four North Carolina counties where a total of 12 Fellows with teaching assignments in middle and high school were provided with a university lab experience in designing wearable nano-devices and sensors to monitor the health of humans and animals.

“The opportunity that you gave me by sponsoring the Fellowship allowed me to bring the Engineering Design Process to my students and show them the connection,” Tomlinson told GSK employees during a lunch and learn at the Research Triangle Park campus. “They picked up on it. They actually understood it quicker than I did.” The Engineering Design Process focuses on design, creativity and innovation as students complete hands-on projects, from the stages of research and conceptualization to detailed design and production.

Don’t only take Tomlinson’s word for it. The five students – Mira Maxwell, Felisher Ongera, Henrry Vivar Gomez, Amira Sanders and Daniella Ballesteros Garcia ‒ spoke about how learning the Engineering Design Process and doing classwork using the Project-Based Learning model has given them much-needed critical thinking skills and taught them not to be discouraged when they do not solve a problem right the first time. 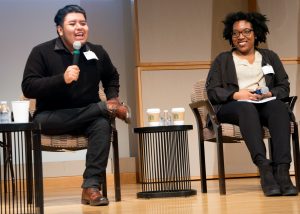 “When I get a B or a C, I don’t mind because it shows that I have made progress,” said Henrry. “I’m not just memorizing answers. It shows that I’ve grown as a person.”